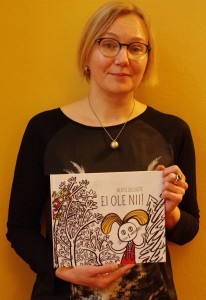 „Ei ole nii!“ is a story about a little rabbit who overcomes its fears and becomes braver and braver. By the time winter turns into summer, it has already learned great words of wisdom: “Rabbits always make it!” The jury appreciated the wonderful illustrations of Sillaste’s book as well as the simple, but to-the-point writing. The author received one kilo of raisins in addition to a monetary money.

The Raisin of the Year Award has been given out every year since 2004. It is meant to give recognition for a children’s book that has been published in the previous year and stands out as a whole, or is extraordinary because of its text or illustrations.