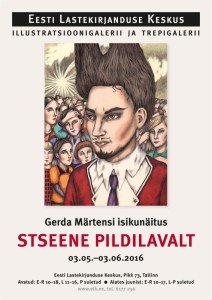 Gerda Märtens’s solo exhibition features over 80 illustrations from the young artist’s published and yet unpublished books. It is open from the 3rd May until the 3rd June 2016 in the Estonian Children’s Literature Centre.

Gerda Märtens is a young, talented and unique children’s book illustrator, whose style combines the influences of Estonian and Italian illustration in the best possible way. Märtens graduated from the Estonian Academy of Arts with an MA in graphic art and studied illustration in Italy in the Macerata Academy of Fine Arts. She has presented her work at several exhibitions in Estonia and abroad. In addition to illustrating books, Märtens regularly collaborates with the Estonian children’s magazine Täheke.

Märtens describes the sense of being a children’s book illustrator as follows: “A book illustrator’s aim is to create a visual universe along with the rules that apply to it exclusively. A world in its creation phase starts to expand as visions in the back of an artist’s brain, and before long, it takes over the artist’s hand, pencils, and papers. When a book’s imaginary world is finished, the artist leaves its door ajar in order to invite the reader in to experience and play along.”

So far Märtens has illustrated four books. The first of them, The Drawer of Happy Bedtime Stories by Hilli Rand (published by Päike ja Pilv, 2014), earned the special prize from the Estonian Graphic Designers Association in the competition “5 Best Designed Estonian Children’s Books 2014”. The picture-book edition of Dino Buzzati’s fantasy-laden short story La Creazione (The Creation) is another remarkable work of Märtens, which was published in Italy and is aimed at slightly older readers (published by Orecchio Acerbo).