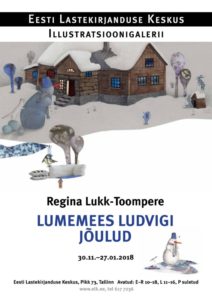 Regina-Lukk Toompere (1953) graduated from the Estonian State Art Institute’s Graphic Art Department as a book designer and illustrator. She is a member of the Estonian Artists Association, the Estonian Graphic Designers Association and the Estonian Section of IBBY. Lukk-Toompere has illustrated and designed over 90 books and textbooks, as well as posters, record covers, postcards, magazines and packaging. At her solo exhibition, works from her latest books are exhibited, among others from Ludwig the Snowman’s Lucky Day (2016).

Urmas Viik (1961) graduated from the Estonian Academy of Arts in graphic design, and is a member of the Estonian Artists’ Union. Viik is an interdisciplinary-, graphic-, book-, installation-, and video artist, and has taught as a professor at the Estonian Academy of Arts and Tallinn University. He has illustrated and designed over 30 books, several which have been awarded at the Tallinn Illustration Triennial, and was on the 2010 IBBY Honour List. On display in this exhibition are illustrations from Viik’s comic book The Case of Santa Theodor (2016).