Avaleht > News > Kairi Look at the literature night in Paris 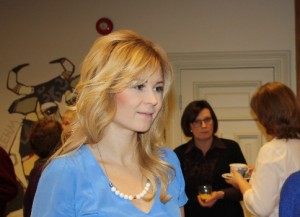 The children’s author Kairi Look took part of the literature festival La nuit de la littérature on May 25th 2019. The author introduced the French translation of her book The Airport Bugs Fight On that was published this spring.

The literature night was held in Paris for the 7th time. Visitors were able to meet many foreign authors who presented their writing in several locations in the Montmartre district. All the foreign authors were accompanied by a comic or a translator and together they read passages from the author’s books on every hour.

Kairi Look performed in the book store Librairie Les Trois Soeurs and read passages from her book with the translator Vincent Dautancourt. They read texts both in French and Estonian. The French translation of the book The Airport Bugs Fight On was published on the spring of 2019 by the publishing house Éditions le Verger des Hespérides.