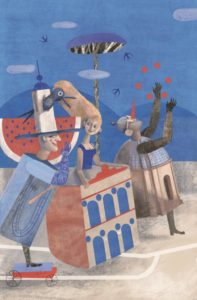 The solo exhibition of the Italian illustrator Anna Forlati will open in the Estonian Children’s Literature Centre hall on July 30th, 2019. The exhibition will be open until 30th of August.

The Italian illustrator has been described as a chamelion of style. Despite the various approaches and techniques of her work the outcome is always mesmerizing. Her illustrations exude the innocence of a child and can be described with words like intimate and mysterious. Her work is also often described as magic realism and the repeating motifs are plants, trees, forests, gardens and other natural elements.

The illustrator has said about her variable style: „I like to experiment with different techniques, work on different atmospheres and with variable colour associations, according to the book or the project. I think that every book has its own peculiar imaginary that needs to be researched“. The selection of these stylistically versatile works are exhibited in the children’s literature centre.

Illustrator Anna Forlati was born in 1980 in Padua, Italy. She studied contemporary art and film history at the IUAV University in Venice and after receiving her degree dedicate herself to illustrating children’s books. She has illustrated more than 30 books and has taken part in several international illustration exhibitions. In 2012 she graduated from the ARS IN FABULA Illustration School’s Master’s program in Illustration for Publishing. Currently she is working at the same school as a professor of illustration.

More information from the artist’s web-page.