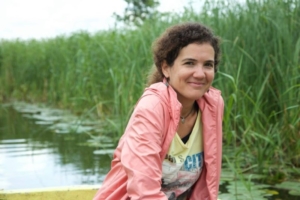 Consuelo Rubio Alcover (1976) studied English and German Philology at the University of Valencia and did postgraduate studies at the Free University of Berlin. In 2003 she arrived in Estonia in order to participate in a European Parliament programme for young conference interpreters. Her bond with the Estonian people, language and culture has become closer and closer every year since. She has collaborated with linguists from Tartu University in a project which resulted in the only existing Estonian-Spanish dictionary. She is an expert in Intercultural Communication and also a language teacher at the Official Language School of Valencia, her hometown.

The first children’s book I translated into my mother tongue was Esterhazy, by Hans Magnus Enzensberger. Shortly afterwards a Spanish publisher offered Priit Pärn’s Tagurpidi, which was a really enjoyable project but also immensely challenging. Translating children’s literature often means you have to go the extra mile to combine the meaning of image and word, and also that you have to “cleanse” your brain and try to think as young readers do, in a less prejudiced, often more perceptive way.

It is a pity that only few from the plethora of Estonian children’s books and authors have been translated into my native language. Estonians have a very wealthy tradition of writing for children and this is why I want to contribute to make so many excellent, smart and tender books accessible to small readers from Spanish-speaking countries.