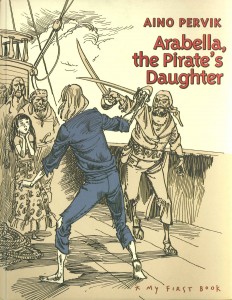 This is the story of Arabella: a little 9-year-old girl whose father is the famous pirate captain Daniel Trigger.
Daniel loves his daughter more than anything, but because of his work, Arabella lives in constant fear of losing her father. Pirates are brutal and greedy – their favourite occupation, apart from carousing in the tavern, is to admire the gold and jewels they have stolen, and to share the wealth that belonged to their dead shipmates. When the shipwrecked wandering philosopher Hassan comes aboard their vessel, the pirates want to kill him straight away, but Arabella buys him for herself for the price of one very precious pearl. Hassan becomes the girl’s friend and spiritual guide, helping her to resist evil.