Kaspar Jancis. Morten on a Ship of Fools 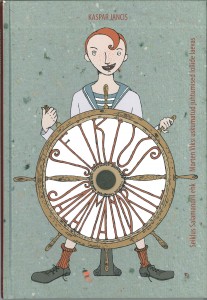 Morten Viks is an ordinary seven-year-old boy who hates playing the piano, collects cockroaches and wasps in his pencil case, and dreams of becoming a sea captain like his father. One fine spring day, Morten’s toy sailboat casts off, manned by a company of insects. From there forward, the events take an almost Kafkaesque turn. The stream turns into a sea, the toy boat becomes a real sailboat, and the insects transform into repulsive, yet strangely familiar human-like creatures. Morten Viks himself is the captain of this vessel, but unfortunately holds no authority over his crew. The reader will find Morten’s fight for survival rather comical, but certainly would not want to be in the protagonist’s shoes. Morten, in turn, will find his experiences very useful in the future.

This quirkily designed book is supplemented by a CD with songs by Kaspar Jancis, performed by the band Kriminaalne Elevant (“Criminal Elephant”).